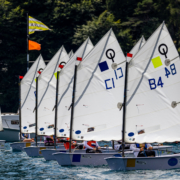 A complicated day on Lake Ledro, where the unexpected withdrawal of the breeze prevented the completion of the races valid for League C, the Round Robin that is involving the eight teams qualified for the Gold Fleet, used to define the draw of the semifinals and the places from the fifth to the eighth.

With eight matches still to be held, the group is led by Poland, capable of winning four of the five duels in which it has been engaged, including those at the top against Italy and Spain. Successes that have projected the Polish team to the top of the provisional ranking, with 18 points, deriving from the sum of the results of the Round Robin which opened the event organized by the Vela Lago di Ledro Association and in the aforementioned League C.

The Italian team went through a not so easy day: after the success with Germany and Croatia was beaten by Poland, Turkey and Greece: a roadmap that cost the advantage obtained by winning the Round Robin and the consequent sliding to third place of the provisional standings, albeit on the equal – 16 points – with Turkey, currently second thanks to the victory obtained in the direct match.

To occupy the fourth place of the ranking, the last valid to conquer a place in the semifinals, it is Spain who, thanks to its 14 points, is called to defend 1.5 lengths of advantage over Greece.

At the same time, part of the races valid for the League D took place, that is for the Silver Fleet which aim to define the positions between the eighth and the sixteenth and where to indicate the way, at the moment, are Switzerland and Israel.

Supported by the Cassa Rurale del Ledro, the Optimist European Team Racing Championship will end tomorrow in the face of particularly heavy weather conditions. The Race Committee is hoping for a manageable situation to complete League C and League D and then proceed to the semi-finals and finals.

However, it should be emphasized that to make the second part of the event valid and assign the continental title, taking into account today’s results, it will be at least essential to complete the flights of the two Leagues. If the weather conditions make it impossible to dispute the remaining tests, the title will be awarded on the basis of the Italian round that opened the event and which, for the record, was won by Italy. 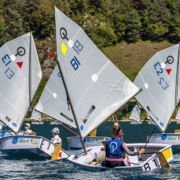 Lago di Ledro – The favorable weather conditions allowed the completion of the qualifying round of the Optimist European Team Racing Championship, an event organized by the Associazione Vela Lago di Ledro. An important step, because the ranking gained at the end of the Round Robin will count as the final ranking if external factors – such as the vagaries of the weather – were to prevent the completion of the final stages of the event.
To conquer the Round Robin, with a partial of thirteen wins and two defeats, was Italy (Emilia Salvatore, Enrico Coslovich, Aurora Ambroz and Leandro Scialpi) who anticipated Poland by one point, already in evidence during the opening day, and Spain which is called to defend the title won last year.
A slight decline, on the other hand, for Turkey which, first at the end of the opening day, struggled to confirm itself on the same levels and finished the Round Robin in fourth place, contrasting ten wins to five defeats.
In addition to the aforementioned teams, Germany, Greece, Croatia and France also obtained the qualification for the Gold Fleet while in the Silver Fleet, therefore out of the games valid for overall success, Croatia, France, Denmark, Holland, Switzerland, Israel, Sweden, Norway, Finland and Great Britain.
Taking advantage of the last puffs of a now dying breeze, the Race Committee chaired by Fabio Barrasso has completed the first flights valid for the League C, or the Round Robin that engages the teams entered in the Gold Fleet for the purpose of the four semifinalists. The first partials rewarded the Polish and German sailors, skilled in winning both regattas in which they were protagonists, while Italy, Spain, Turkey and Croatia ended the day with a score of one victory and one defeat.
Supported by the Cassa Rurale del Ledro, the Optimist European Team Racing Championship will resume tomorrow morning at 10.30 with the aim of defining the semi-final draw while teams from 5 to 16 will race in 3 different round robins, useful for defining the positions including fifth and sixteenth. 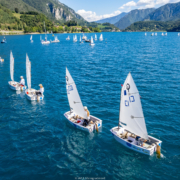 Ledro Lake, 24th August 2022 –
The first day valid for the Optimist European Team Racing Championship, an event organized by Associazione Vela Lago di Ledro in collaboration with the Italian Sailing Federation and IODA (International Opti Dinghy Association), is just over. The sixteen teams present on the Ledro waters, for a total of sixty-four athletes, were engaged in more than sixty-five matches. An almost frenzied pace, made possible on the one hand by the favorable weather conditions, and on the other by the excellent work done by the Race Committee, coordinated by an always attentive Fabio Barrasso.
Team Turkey, which won all seven matches sailed, is the first hour leader with a 100% score. In the provisional ranking the Turkish representative is followed by Italy and Poland, paired thanks to a score of eight victories and one defeat. Italy was beaten just by Team Nederlands, while the Polush gave way to the Italian team who count on the reigning European champion Emilia Salvatore, Enrico Coslovich, Aurora Ambroz and Leandro Scialpi.
“It was an excellent day of sailing, well interpreted by the guys who, despite the long hours spent in the water, managed to keep their concentration high and to collect important points in view of the continuation of this long and articulated event” explained the Italian team principal, Maurizio Scrazzolo.
Rounding out the top five are Germany, fourth with six wins, and the pair made by Spain, favorite of the day before as defending champion, and Greece, which have collected five victories.
Supported by Cassa Rurale del Ledro, the Optimist European Team Racing Championship will resume tomorrow morning at 10.30 with the declared goal of completing the qualifying round by heading the remaining fifty-eight matches.
Photo Gallery Day 1
http://www.avll.it/wp-content/uploads/2022/08/IMG_5998.jpg 1190 2000 camilla http://www.avll.it/wp-content/uploads/2014/12/Barra-pag-IL-CIRCOLO-670.jpg camilla2022-08-24 19:56:002022-08-25 08:24:35On Day 1 Team Turkey show the way but Italy and Poland are really close