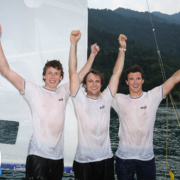 There was few wind on Saturday in Valle di Ledro, but despite this, the EUROSAF YOUTH MATCH RACE EUROPEANS program was concluded.

Rocco Attili with Ludovico Mori and Giulio Tamburini, faced the finals by appearing first and held up against the outgoing European champions the French with Aurelien Pierroz, Lucas Peuziat and Theau Guilcher.
With a score of 3 to 2, the Italians climb the highest step of the podium second step goes to the European champions 2018, Aurelien Pierroz’s French team.
The English have to settle for third place with Matt Whitfield, Ted and David Blowers who had appeared on the starting line as the favorites being 20 in world rankings and having won the first round robin with 0 defeats, the Danes of Emil Kjaer, Basti Sorensen and Nicolai Bækgaard got the fourth place.

The words of President Camilla Baruzzi: “first of all, thanks go to my team, which has proved to be of unquestionable professionalism and it was exciting to see how young sailors proved to be mature and tireless, collaborating with the Club’s veterans, this is the real luck of our Association, to be able to count on the voluntary work of the members of the Club who are invaluable during these events, giving great prominence to the Association and the Valle di Ledro but they are also very tiring.
The Race Committee and the International Jury carried out an impeccable job completing all the scheduled matches, the sailors proved to be serious and prepared despite their young age.
Once the regattas have been archived it is time to think about the Sailing School, in fact the boys will start sailing courses on Monday, a precious opportunity to introduce our sport to youngs “