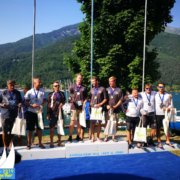 A fantastic panorama of the Valle di Ledro on Sunday was the setting for the last day of the 10th edition of OM INTERNATIONAL LEDRO MATCH RACE gr.2.

All the matches fought until the finish line, intense the races that have put a strain on both the competitors and the Jury, led by the Chief Umpire Bruce Hebbert, as well as by the Race Committee, chaired by Fabio Barrasso.

In the end the victory went to the New Zealand Knot Racing with Nick Egnot Johnson at the helm, Sam Barnett to the sheets and Zak Merton in the bow, second the favorites, and winners of the last edition, the Estonians of EESTI MATCH RACE LIAT by Mati Sepp , Karl Kolk and Karl Hannestagv ..

For the third and fourth place, the Slovenians of LUMBA Match Race Team with Dejan Presen, Miha Truden and Jure Jerkovick met the Polish HRM Racing Team of Lukasz Wosinski, Igor Tarasiuk and Marcin Banaszak.
The best were the Polish who beat the Slovenians who were among the favorites 2-0, as well as for the world ranking also because it is the tenth consecutive year that they participate in the events organized by the Associazione Vela Lago di Ledro.

Once this regatta is over, the president Camilla Baruzzi and her team have only two days of rest and then put back into action the whole organizational machine that will see them engaged in the last match race regatta that will start on Wednesday, the European Youth Championship.

Great satisfaction of the Associazione Vela Lago di Ledro that among the few Club in Italy to organize these types of regattas and is the only one in Trentino. 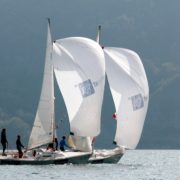 Perfect day for the match race regattas, gusty wind, which made possibility to see the true skills of the sailors.
The level of the skippers who sailed from 10 in the morning to 17:30 is very high, for now there are the New Zealanders with Nick Egnot Johnson, Sam Barnett and Zak Merton, on equal points with the Slovenians of Lumba Match Race Team with Dejan Presen, Miha Truden and Jure Jerkovic who are in second place having lost the direct match with the New Zealanders, third provisional place from the 6 in the WS’ ranking the Estonians of EESTI MATCH RACE LIIT with Mati Sepp, Karl Kolk and Karl Hannestagv.

Tomorrow is scheduled to finish with the remaining 18 matches to finish the round robin and then will decide whether to continue with another round robin or to start the King of the Castle, while from the first to the fourth they will play the semi finals.

Efficient organization of the Vela Lago di Ledro Association, which as always has very valid volunteers able to manage every type of situation.

The Eurosaf Women Match Race Europeans ended today, which saw the French favorite respecting the prognostics. In fact, she won the Finals over the German 3-1, both appearing in the finals after three consecutive victories in the semi-finals, they left the British team Athena Racing with the young Octavia Owen at the helm, against the Swedish Stockolm Match Race Team, helmed by Sanna Hager who managed to get on the third step of the podium.

Pauline Courtois at the helm of Match in Pink, first ranked of the world sailing ranking, got the better of the German HSC Women’s Match Race Team that appeared at Ledro after many years of stop but immediately found a feeling both between the crew and the wind of the Lake Ledro.

Great satisfaction for the Associazione Vela Lago di Ledro for hosting a Women Championship, now two days off for the Sailing Club and then start again with the tenth edition of OM INTERNATIONAL LEDRO MATCH RACE gr.2.

Yesterday, in Valle di Ledro, the European Women’s Match Race Championship has begun, after the boat practice the President of the Jury declared the Championship open.

Today, the Race Committee, chaired by Carmelo Paroli in accordance with the International Jury headed by Michael O’Connor, have decided to carry on as much as possible with the program as the weather forecast for tomorrow is not so good, thus concluding 2 round robins .

After a long day of racing, the French crew Match in Pink led by the first in the World ranking list Pauline Courtois followed by the german Silke Hahlbrock Basedow of HSC Women Match Race who decided to start again from Ledro with the match race, third for the moment the British crew of Octavia Owen, the youngest of the athletes.

Tomorrow, the weather seems not to be favorable, but nothing is taken for granted and we will try to give the starting signal at 10.00.